Ryan F. Wojtowicz is a longtime nazi, white nationalist organizer, and very active member of Keystone United. Wojtowitcz has attended most, if not all, Leif Erikson Day events.

Wojtowicz models himself after KSS co-founder Steve Smith, and has followed him into the Luzerne County GOP as a committeeman. 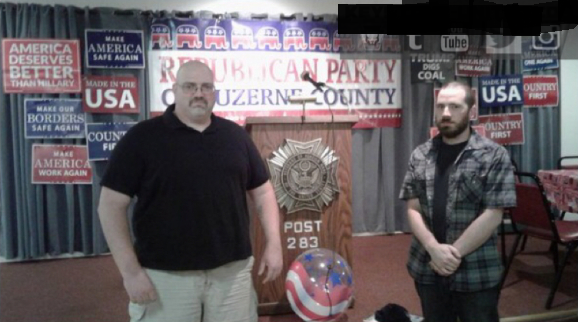 Wojtowicz attends almost every Keystone United event in the area and has written content for their blog. Wojtowicz is also active in the Pennsylvania Council of Conservative Citizens, the European American Action Coalition, and the American Freedom Party. All projects Steve Smith is involved in as well (Smith and Wojtowicz founded the EAAC). Despite being only 28, he has been involved in White Nationalist organizing for nearly 10 years. Wojtowiczs’ last known address is 418 E. Noble St., Nanticoke, PA.

We are asking our readers to help us ascertain where Wojtowicz is working and send that, and any other info about him, our way.