As many of our readers are probably aware, in the aftermath of the Unite the Right rally in Charlottesville, VA in August, there was a huge push among Neo-Nazis, especially those associated with 8chan’s nazi-infested “Pol” board, to dox and harass Anti-Fascists who participated in protesting the rally.

One nazi in particular, going by the alias Jack “Pale Horse” Corbin, was especially prolific in doxxing Anti-Racists and Anti-Fascists. Eager to unmask Pale Horse, Anti-Fascists within the TORCH network, as well as independent Antifa, rushed their research and made a critical error by falsely identifying Corbin as Jake Loubriel of Dania Beach, FL.

To be fair, not only is Loubriel a far-right racist Trump supporter, he has participated in doxxing Antifa, just not under the alias Jack Corbin.  Corbin stole pictures of Loubriel from social media and intentionally used them as a red herring to throw off Antifa.  This was an deliberate deception by Corbin; not an oversight by Antifa. Loubriel and Corbin are both living in Florida and have intersected on open carry and 2nd amendment pages.

Loubriel also appears to support Corbin doxxing and threatening Anti-Racists and Antifa. So while we should always strive for 100% accuracy in our reporting, and those who rushed to identify Corbin as Loubriel should take a serious lesson from this, they can take solace in knowing that the person falsely accused of being Jack Corbin is still a piece of shit far-right racist who has participated in the doxxing of Antifa, just not this Corbin piece of shit in particular.

For our part, we would like to apologize to our readers for re-posting and blindly accepting the dox of Loubriel.  The information seemed legitimate and the source was trusted, but, obviously, we should have independently confirmed it as such.

After learning that Loubriel was not Corbin via an infiltrator, our intel department went to work trying to positively ID them once and for all. After much research, we are prepared to name Jack “Pale Horse” Corbin as Daniel William McMahon of Brandon, FL.

Once you look past the misinformation regarding Loubriel that McMahon engineered, it actually was not too difficult to ID McMahon. As we’ve seen many times in the past, the work was aided from within the enemy’s movement.

Some of our readers no-doubt remember Craig Cobb’s disastrous attempt to start an “all white settlement” in North Dakota a few years back. It was the subject of the documentary “Welcome to Leith.”  The Leith settlement was an initiative of the group “Pioneer Little Europe” (PLE), which sought to establish all-white communities by taking over small towns and inviting Nazis to come settle with them.

During this time period, PLE had a vocal supporter active on the White Nations nazi message boards who was going by the username “Pale Horse.” Pale Horse was also referred to in 3rd person by various posters on Stormfront during this time. Pale Horse started several FB accounts for Pioneer Little Europe and was actively harassing and doxxing people associated with Unity ND, a progressive Anti-Racist organization working against PLE in ND.

Anti-Racists were not the only ones targeted by “Pale Horse,” though.  A feud developed between Pale Horse and the Traditionalist Worker’s Party, seemingly started over a slight on social media, and led to TWP taking down their FB page (which has since been banned) briefly.  PLE distanced themselves from Pale Horse at that time but he continued to rep them.

The feud led to an article being published on Occidental Dissent, a nazi blog, which criticized both organizations.  In the comments of the article, a user name “GHM” claims:”

Pale horse is either Daniel McMahon, or David Jarosz…Daniel has some scary stuff online, he called a family restaurant and threatened to bring a gun, he was bullied as a kid, now he lifts and although PLE doesn’t condone violence, he will meet any of you face to face for an MMA style cage match – except he wants to remain anonymous so he won’t meet you for that fight. The horse once posted some graphic imagery of sick babies (non White) When people, WNs, asked him why he was so happy about the sick babies, he banned them, said they were too soft for WN. I guess Pale Horse would get along great with child murderers.“

The controversy around Pale Horse running the PLE facebook made it’s way onto another White Power message board, “White Nations.”

If you compare the “Pale Horse” who posts on White Nations  and was running the PLE facebook page and the “Pale Horse” who has been doxxing Antifa post-Cville’s discord logs, there can be no doubt this is the same person.  The extremely offensive language, the same story about a black person “burning” their car, interest both in guns and swords (specifically Gladius), the use of distinctive terms like “ghost activism,” the promotion of PLE, the infighting with other WN groups like Identity Europa (from whom Corbin was kicked out) and TWP, and the Florida location all match.

Then there was this mysterious post mode back in 2014 on a “Pioneer Little Europe” page that seems to either be some sort of honeypot or have been taken over by Anti-Racists.

Allegations that Pale Horse is gay were again levied on the White Nations message board and they address them in a furiously hateful way: There was also this post on Stormfront from around the same time also naming Daniel McMahon as a member of PLE: What clinched it for us that Pale Horse was in fact Daniel W. McMahon was this article published 5 years ago about McMahon calling from Florida and passively threatening a coffee shop in Seattle by threatening to bring a gun.

The story is eerily similar to the claims made above that McMahon “called a family restaurant and threatened to bring a gun.”

During an interview with the reporter McMahon ler an important fact  slip. It is worth noting that at this time period “Pale Horse” claims they were just beginning to get into white nationalism, so they would not yet be conscious of protecting anonymity.

“That said, McMahon is not without a Seattle connection. McMahon, 25, says he was born in Seattle, but moved to Florida 15 years ago. “I love Seattle,” says McMahon.”

Corbin also discusses a nightclub in Tampa called “The Castle:”

The familiarity with the club would support that Pale Horse lives near Tampa, and not in Dania Beach, which is 3.5 hours from Tampa, as opposed to Brandon, which is 20 minutes away. 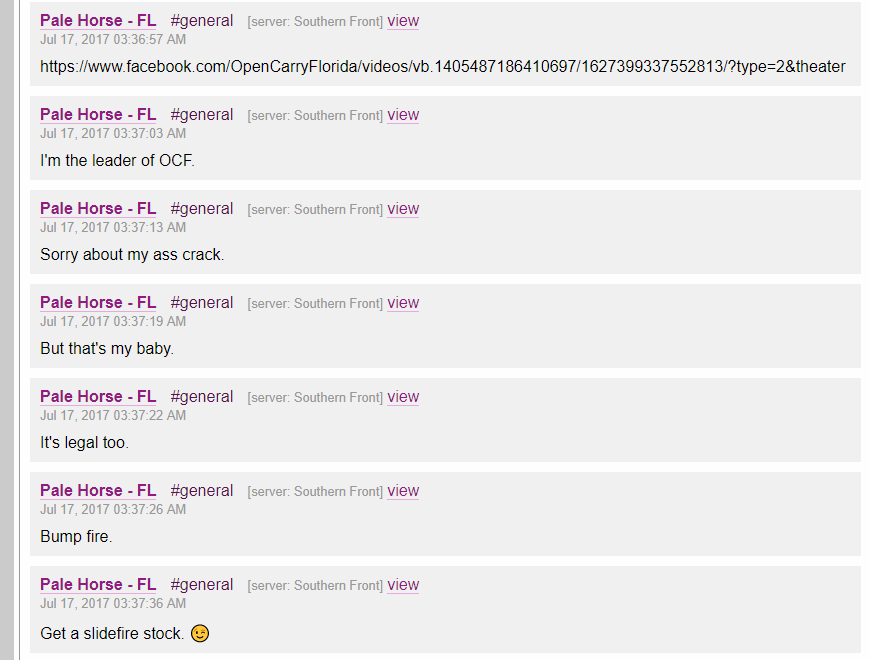 The video McMahon/Corbin links is this one, which unfortunately, is the best image we have of McMahon.

The OCF facebook page also posted these 2 videos by the admin from their home. As you can see, the home has an enclosed glass patio in back with a pool. Daniel W. McMahon lives at 403 Park Manor Drive in Brandon, FL. When one looks at the google earth view of this home, this is what one sees:

If one watches this endorsement video posted by OCF, they will notice that the admin is holding a pen from Bergman’s European Auto, located in BRANDON, FL.

2 e-mail addresses used by Corbin, jadesnake@gmail.com and haemophiliacs@gmail.com, both link back thru web searches to Daniel McMahon and a fake address in Brandon, FL.

Recently, McMahon/Corbin was discussing moving away from Florida both on his gab (nazi social media platform):

The evidence that Jack Corbin is in fact Daniel W. McMahon is overwhelming. Anyone with any more information or pictures of McMahon should please e-mail them to us at PhillyAntifascists@protonmail.com.

McMahon/Corbin seems to have taken a special interest in Anti-Fascists from Philadelphia, so we have decided to take a special interest in him.  We will continue to research and report whatever info we find on McMahon, but we felt compelled to release this info ASAP to correct the previous error.