Robert Heston (Bob) Gaus is a longtime neo-nazi and co-founder of Keystone State Skinheads. He is heavily involved in a leadership role with Keystone United and KSS. Less is known about his activities before being in KSS, but it is known that Gaus aspired to joined a 1%er Motorcycle Club but was rebuffed. Gaus has attempted to recreate that environment with KSS, even as their Keystone United brand offered them much greater success than being a bonehead crew ever did.

Gaus pled guilty alongside fellow nazis Doug Sonier and Joseph Hoesch for assault for a 2002 assault in a diner in Feasterville, PA after a man asked them to stop throwing food at his table.  Gaus’ legal history of Dauphin County is extensive and includes assault, resisting arrest, and possessing a gun while a felon. He also has been arrested at least 3 times for DUI.

Gaus lives in Harrisburg and runs the Harrisburg unit of KSS, which, is in reality, a revolving door of his drinking buddies. Gaus is 47 and has a linkedin profile claiming to be an “Independent Sports Professional.” That is probably a reference to “Brutal Force Athletics,” a clothing label Gaus runs, the website of which has not been updated in several years. That said, many members and associates of KSS can be seen wearing Brutal Force Athletics gear, so it is good to be aware as a potential way to ID KU/KSS nazis.

Bob Gaus was married in 2015 to his wife, Melissa Gaus (Regl). Melissa is also a nazi and vocal member of KU/KSS. She is 39 and works as a model and actress. She is from Baltimore, MD. 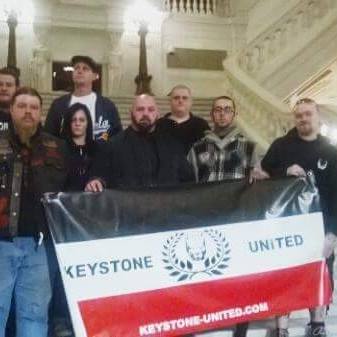 Just this summer they put a pre-assembled home on a parcel of land Gaus owns at 10 Small Valley Road in Halifax, PA. They are either moved in there or still living at their old place at 7112 Union Deposit Road, Hummelstown, PA. We are asking our readers to help us find info on what else they’re currently doing for work, if anything.