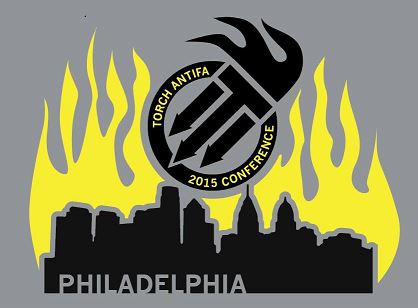 Our 2nd annual conference was a huge success. Delegates were sent for the private plenary from Antifa Philadelphia, South Side Chicago Anti-Racist Action, Los Angeles People Against Racist Terror (PART)/A.R.A.-L.A., NYC Antifa (who are not TORCH members but were vouched in as observers), Rocky Mountain Antifa and the Antifa International Collective, based out of Quebec (also non-members). Antifa International traveled down to make connections between TORCH and Canadian Antifa, as well as to discuss their International Anti-Fascist Defense fund, which TORCH has endorsed and many of its members will be participating in.

Once the public section started we also met up with members of Asheville Anti-Racists, New Jersey Antifa, independent Anti-Fascists from all over the region, and even a pair of Dutch Antifa who happened to be in the city for holiday. Attendees were treated to a panel discussion and Q&A about Militant Anti-Fascists role in the Black Lives Matter movement, a video of which should be posted online shortly. Afterwards they saw a Russian documentary just recently translated to English “Ivan, in memory of our friend…” about the life and death of Russian Anti-Fascist Ivan Khutorskoi. They also got a sneak peek of the up-coming documentary about the Anti-Fascist movement in the U.S. entitled “No Fascist USA” by seeing a 10 minute trailer that will be uploaded shortly as well.

The conference show/after party featured some of the best bands playing in Philly right now and one visiting guest. Special thanks to Soul Glo, Fuck S.S., Autocracy East, Christopher Walking, Novatore (who came all the way from Chicago) and Leisure Muffin for playing. In addition to the acts we would like to thank The Rotunda for hosting, our panelists for taking the time, Black Orchid foods for letting use use their stuff, and Scranton IWW for providing security during our plenary so that all network members could participate.

It was a privilege to host the TORCH Conference and we thank everyone who attended, especially those who travelled from far away. We are already siked for next one.